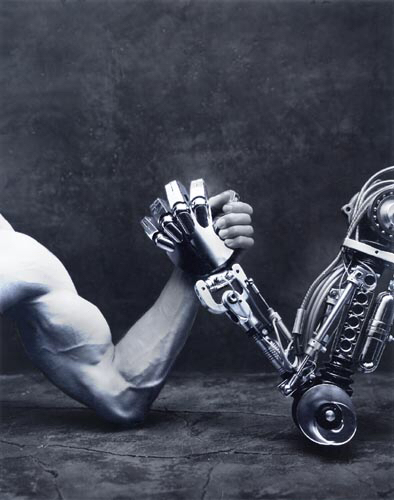 Lud·dite –ˈlədˌīt/ – noun
− a member of any of the bands of English workers who destroyed machinery, especially in cotton and woolen mills, that they believed were threatening their jobs (1811-16)
− a person opposed to increased industrialization or new technology.
− “a small-minded Luddite resisting progress”

Luddites. Those infamous, sledgehammer-wielding destroyers of industrial sewing machines. Ancient predecessors of all those who shun Tesla, abhor Drones, and refuse to Snap. Modern-day shorthand for anyone who thinks life would be better if we still foraged for food in sheepskins and died at the age of 15 from scurvy.

If the Internet is any judge then there are still a vast number of Luddites around. Maybe not wandering the Google campus with a crowbar, but certainly complaining about online banking, hover boards and teenagers. And spoiling things for clear-thinking technophiles whilst they’re at it. Who are these neo-Luddites? Let’s list a few:

Old people = Luddites
Middle-aged people = Luddites.
Babies = Probably Luddites.
Advertising people who still make TV commericals = Definitely Luddites.
Millennials = Definitely not Luddities. (Unless they are. In which case they’ve probably just gone off the grid in the pursuit of authentic experiences. They’ll be back)
Futurists, Tech Journalists and Marketing Bloggers = Luddites pretending not to be Luddites by talking bollocks.

In a society where technology has become everything, everywhere, there’s almost nothing worse than being associated with the ‘L’ word. It means that you’re out of touch, behind the adoption curve, backwards in going forwards, an enemy of progress, a friend to reaction, and you certainly lack the kind of vision that only a helicopter can provide. Get out of that old fashioned box, man, it’s constraining your thinking. Might as well kiss your job goodbye, give your seat up to somebody who knows how to code, and go back to writing with a quill by candlelight, grandpa. Goddamn Luddite.

Which is all, as they say, simplistic bullshit.

It should be possible to applaud as IBM Watson crushes another puny human at something creative, and geek out over the Martin Jetpack, whilst still acknowledging legitimate concerns about the impact of technological change and the unevenly distributed benefits of progress. And, as it turns out, the real Luddites from 200 years ago had a point to make on this that almost everybody has forgotten. A damn good one.

Far from the shouty, rabid mob of the popular imagination, constantly foaming at their proletarian mouths, in reality the Luddites were skilled, middle-class workers who simply wanted fair pay for honest work. They were totally cool with new machines, they just weren’t totally cool with manufacturers who used new machines as a handy excuse to screw their employees. And when they started smashing up looms in 1811 it was very much a last resort, once they realised that the supremely entitled one-percenters of the time weren’t big on giving ground to anyone without a mansion, a title and twenty three butlers. So the Luddites weren’t anti-technology, they were pro-fairness and they knew how to get people’s attention. Destroying machines created the click-bait of their time: “10 Things You Didn’t Know About Taking A Sledgehammer To A Spinning Jenny” was the kind of headline they were after.

They were also way ahead of the curve when it came to branding. The fact that the name of their short-lived protest movement is still remembered is testament to some progressive marketing thinking that would probably win a slew of creative awards today, including a Cannes Grand Prix for Industrial Deconstruction and the D&AD Wrought Iron Pencil. Perhaps the most interesting thing about them is that the eponymous founder of the Luddites, Ned Ludd, probably never even existed. An apocryphal story about a machine-flattening apprentice from Nottingham called Ludd or Ludham became the movement’s inspiration a quarter of a century after his probably fictitious act of defiance. They realized that if you say something untrue often enough it’ll eventually become fact – centuries before George Orwell and Donald Trump jumped on that particular train. So Ludd’s name was signed at the bottom of ‘official’ documents, creating the appearance of cohesion and scale where none really existed and, meanwhile, protesters took to marching in women’s clothing as ‘General Ludd’s Wives’ – symbolizing the topsy turvy new world in which they had found themselves. In an era when Punch and Judy shows were considered the height of entertainment, these things got noticed.

Better wages and dubious drag aside, though, what really lay behind the Luddite philosophy was something simpler and more fundamental. Whilst many people at the time appreciated the benefits of the industrial revolution they also worried about it effects. As Thomas Carlyle pointed out in his 1829 essay The Sign of the Times:

“Men are grown mechanical in head and heart, as well as in hand”

Ludditism at its core was a plea for humans to be given equal weight next to all the shiny new technology. Far from being the heroic defenders of a pre-technological way of life, the Luddites were the pioneers of a more symbiotic, empathetic approach to progress. And we’d do well to remember it. In a world where social media has polarized whole societies and helped install a narcissistic, orange, game show host as President; where programmatic advertising stalks us mindlessly around the web, offering us things that we’ve already bought; and where AI threatens to go all Skynet on entire industries, it pays to underline the value of humanity amid all the dizzying change.

The fact is that we need more Luddites, in the original sense of the word. Because our businesses, our marketing, our advertising, our everyday lives are all made infinitely better when we put the gleaming new technological baubles we create at the service of people rather than the other way around. It’s time for the term Luddite to be reclaimed for what it is, a proud badge of simple humanity in an ocean of advanced technology.